I was bummed last Friday when there wasn't a new block to do.  I knew there wasn't going to be, but I really didn't want to have to put away all the fabric I got out auditioning for the first block.  I'm great at getting out, but putting away is not my forte.  Unfortunately, I think my children have inherited this gene.

It's a fun one.  Kind of reminds me of a card trick block.

Seeing them side-by-side, not sure if the greens/blues in the corners were the right choice.  One is definitely more blue, maybe I should have gone solid?  But, I have more opportunities for other blocks...just a 2 week wait away!


Not to late to join the fun!

Email ThisBlogThis!Share to TwitterShare to FacebookShare to Pinterest
Labels: quilts, virtual quilt along

Today I'm linking up to meet:  my machine at The Tiltled Quilt. 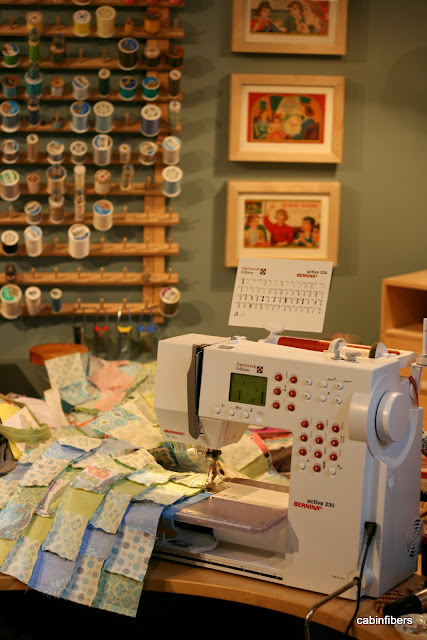 One day, I was looking on eBay for a used serger.  I was mainly searching for a Bernina because I was confident that even an older model would be sturdy and run well.  I wanted it for finishing unlined garments, and making kids' Halloween costumes.  Nothing fancy.  The machines I was looking at were 20+ years old, and probably hadn't been used in half as long.  But my husband caught wind of what I was doing, and went out an bought me a brand spankin' new one as a gift.


The sweet ladies at the sewing machine store, also told my poor man that this machine is excellent for quilting (ha!)  He brought her home and I attempted my very first quilt with her.  Needless to say, the points (nubs!) on my pinwheels didn't exactly lay very flat.  I felt a little guilty for having a machine that cost twice what my regular machine, a EuroPro Shark, did at the time.  Especially when I couldn't even make a simple quilt on it.  So, my husband "fixed" it by going out and buying me a proper quilting machine.  The Bernina Activa 230PE...the PE is for Patchwork Edition (and if you ask me, PErfect!)


And this is why I wouldn't trade her for the world...the #57 Patchwork Foot.  A true 1/4" seam without even trying!  See the little arm on the right side?  It lines up your fabric for you.  Genius!

But after making a quilt or two, I discovered her Kryptonite.  She's petite, and it's almost impossible for me to quilt a big quilt on her with her itty bitty harp size.  So, my husband fixed that, too, and found a mid-arm Babylock on Craigslist for me.

My favorite thing about this one is the power.  She can GO!  And she has a thread cutting feature that I've gotten spoiled by.  She also has an even feed pin that's neat, but I mostly use her for FMQ'ing.

Even though I didn't pick any of these out for myself, they couldn't be any more fitting.  They are fantastic machines, but also remind me how lucky I am to have someone who supports me and my interests, even when he doesn't share them.

And he puts up with my disaster of a sewing room.  He's a keeper. 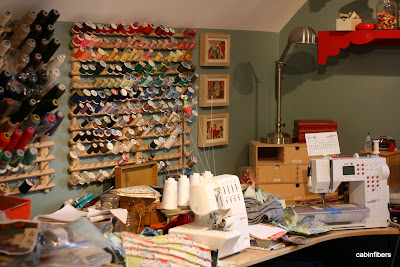 I saw the first block for Diary of a Quilter's Virtual Quilting Bee earlier this morning, and then got out some Farmer's Wife blocks to work on.  But while I was rummaging through my bins, I came along this stack of Hometown charms, and some Urban Cowgirl I had put with it, and that star block was calling my name.

So, I have begun yet another new project.

Even though I've made this block before, I usually don't take the time to trim all of my HST's.  But for this one, I decided to do it the "right" way.  I admit, it did come together well.  However, as I was cruising along, I accidentally trimmed the top right block on the wrong side!  Ooops!  It's a little short (~1/16"), but it'll work out into the seam allowances.  I made sure the points still ended up in the right spot.  I would have cut another one, but I used 2 of my 5" charms (3" x 3" each), and didn't have extras.

Email ThisBlogThis!Share to TwitterShare to FacebookShare to Pinterest
Labels: quilts, virtual quilt along

This first project has been on my to do list for a LONG time.  We spend a lot of time in the car going to and from the cabin, which means we may or may not be eating food in there.  And I desperately needed a way to contain the trash that accumulates.  Particularly in the back seat, where some little boys sit.  So, I made a slightly smaller version of this grocery bag holder from a few extra charm squares.  The charms were assembled in rows, and then sliced and rearranged before being resewn into a block.


I used my serger for the final seam, but I don't love it.  At the top around the elastic, it's bulky.  I plan on making another one (or two, or three), and will change that next time.  I'll probably still serge the inside, just stop before the end.

But, it's perfectly useful, and headed for the back seat.  Now the trick is training them on how to use it.

My second finish is a little knitting project that took much longer than it should have.  It got lost in my knitting pile.  The Asheville Hat! 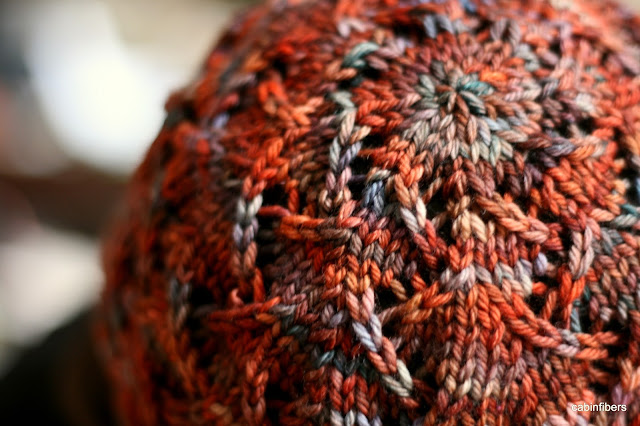 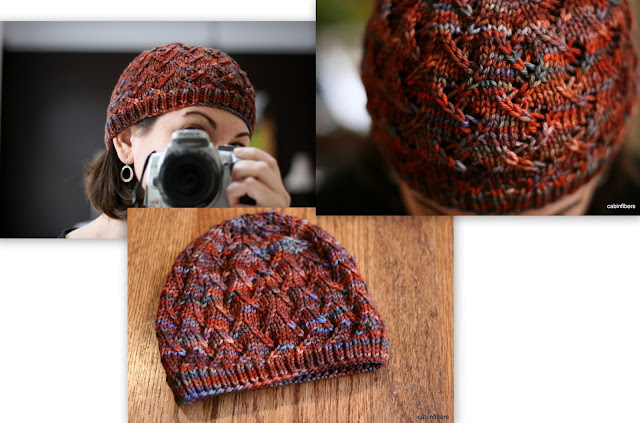 Malabrigo is soft, washes well, has lovely colors, but one of my favorite things about it, is how much I always have left over!  I think I've got enough for mitts or maybe a small cowl.  Love that.

Next up, a little Triple Zip pouch for my Nana's birthday (shhh...I just mailed it.)  I used an alternate method for the last seam, since I had some trouble last time.  It's similar to my regular pouch making method, and went a bit more smoothly. 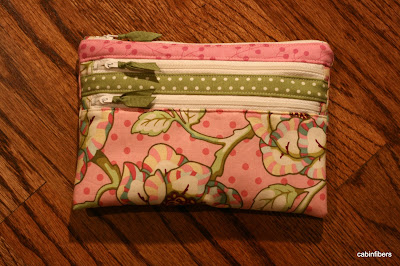 And finally; impulse-buy fabric, a couple zippers, and three boys out ice skating; equals a perfect storm for some new couch pillows! 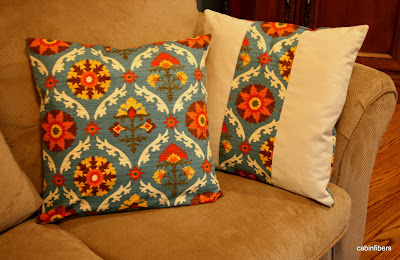 The stripe was a result of me being cheap and only buying *just* enough for two pillows.  I had to center the medallions, and ended up a bit short on doing solid fronts and backs.

I also tried a new zipper method.  I basted the opening, applied the zipper to the back, and then removed the basting.  I liked it, but on the bottom of a pillow like this, where it naturally folds open, a small flap may have been neater.

No doubt they'll need replacing before too long, anyway!  Pillows don't spend much time on the sofa here.

That's it for this week.  Happy Friday!

Linking up to finish it up Friday @ crazymomquilts

This is long (long) term WiP, but I got the blocks laid out this week to try and decide if I'm at least close to a quilt.


I think I've decided on the suggested on-point layout.  I considered doing every-other-block, but there aren't any that I really mind, maybe other than Pine Tree, on the diagonal. 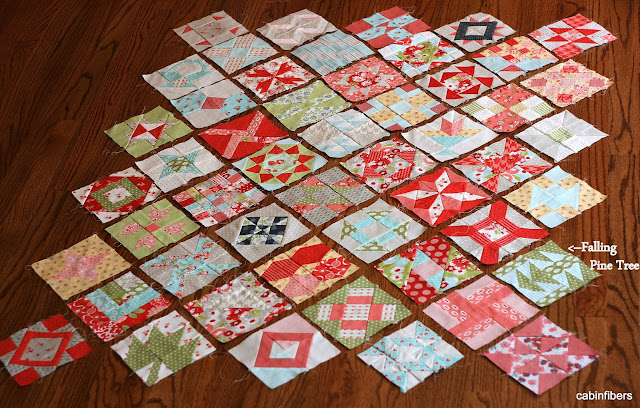 Still need a row or two. 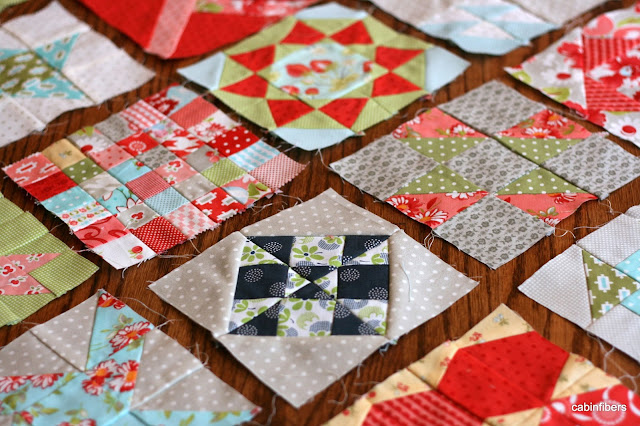 And I think I may use the navy from this block, for the sashing corners, to break up the pink a little.


Linking up to WiP Wednesday at FreshlyPieced 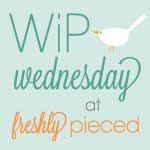